Here are some progress pictures from March of 2015 when I finally joined a gym to August of 2016.  When they were taken I had no plans on sharing so be nice.  I know my legs are lacking which is why I chose to expose them in my progress pictures.  Everyone has a part of them that just won’t cooperate and with me its my legs, but that is OK with me.  The challenge makes it that much more worth while.  So as of now my main focus is building my legs and upper chest.  My back is overdeveloped due to the reason I began lifting.  In the beginning I needed to strengthen my back and core and from the looks of it I got carried away on back day.  Call me lucky but I just never have carried much body fat, but that isn’t such a good thing when my goal is to gain mass.  My goal is to be 175 lbs before my cut.  I will keep adding progress pics as my competition in April gets closer. 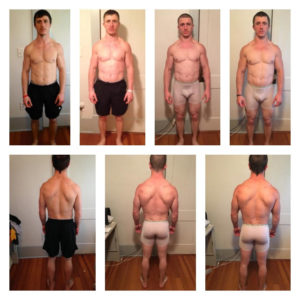